Bajaj stopped making scooters for years. However, Bajaj Auto has returned to the scooter market with the legend. The Bajaj Chetak electric is the company's first and only electric scooter and is now available at dealerships and priced at Rs. 1,49,131. Bajaj currently manufactures only one scooter.

Bajaj Auto is one of the oldest and leading two-wheeler manufacturers in India. Started as a scooter and auto-rickshaw manufacturer in 1959, it became a force to reckon with in the Indian bike market after it rolled out its best-selling model Pulsar 150, in 2001.

Bajaj Auto is now one of the country’s largest bike and three-wheelers makers. It has 23 bikes and one electric scooter rolling on the Indian market as of the last week of August 2022.

It has a joint venture with Austrian motorbike brand KTM, making some bikes at its Chakan facility. It also has inked a pact with British motorbike brand Triumph Motorcycles to build mid-capacity bikes in India.

The presence in over 70 countries makes Bajaj Auto the largest two-wheeler exporter from India. 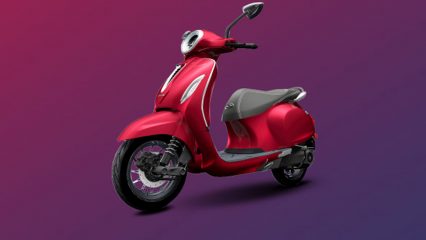 Bajaj Chetak: The Iconic Scooter Returns In its Electric Avatar Gets Incredible Design And Features

Bajaj Chetak: The Iconic Scooter Returns In its Electric Avatar Gets Incredible Design And Features

Is it possible to charge the Bajaj electric scooter at home?

The scooter includes a charger, which can be charged by plugging into a standard 5-ampere home power outlet.

How fast can the Bajaj Electric Scooter go?

The company claims a maximum range of 95 kilometres in Eco mode, with a top speed of 70 kilometres per hour.

Does the Bajaj scooter have a reverse ride mode?

Chetak has three ride modes. There are two forward gears - Eco and Sports - and one reverse gear.